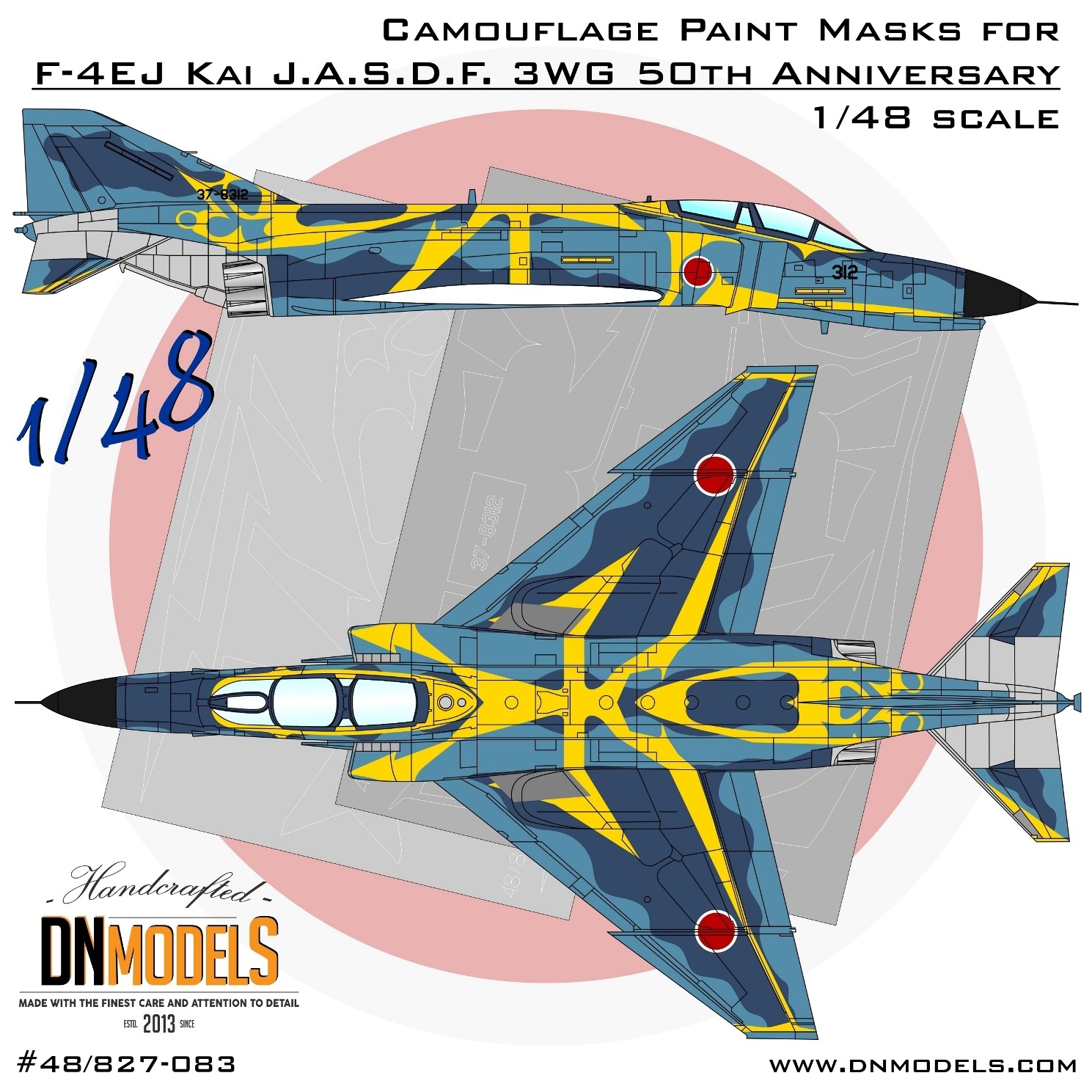 This set includes the yellow markings, the roundels and the numbers. It does not include the blue camo scheme.

The set includes two sheets of pre-cut masks (shown in the picture). The masks are made from thin masking tape, which is easy to be peeled off and doesn’t leave any stains. The tape is tested on clear and painted model too. If carefully removed after painting, they can be used over and over again. It is flexible and easily applied over curved surfaces. Semi-transparent for easy and accurate placing.

F-4EJ Kai
is a license built F-4 by Mitsubishi Heavy Industries. F-4EJ is an upgraded variant of the Phantom. It was equipped with new radar and new computer systems, improving the original capabilities of the fighter jet significantly. The planes flew all together with Japanese F-15, with primarily supporting role. With the advancement of the new age, planes were slowly replaced by Mitsubishi F-2 and soon they will be completely replaced by F-2 and F-35. This particular scheme can be found as a decal option, as well as in a stand-alone decal set. However, due to the size and complexity of the special paint scheme, replicating it with actual paint is providing superior realism compared to decals. This set includes the yellow markings, the roundels and the numbers. The standard two-tone blue camo paint scheme is to be done freehand as it was applied on the real aircraft.

J.A.S.D.F. 3WG
mask set represents one of the most attractive Anniversary Celebration paint schemes ever applied on F-4EJ Kai planes. Bright yellow figures are painted over the standard camouflage and show significant change in the appearance, making the Phantom to look like there is an Octopus over it. Hence the “Octopus Camo Phantom” as many refer to this specific bird. This was part of the 50th Anniversary celebrations of 3WG of the J.A.S.D.F..

As of the late 2020, F-4 no longer serves with J.A.S.D.F. and flies only for specific test evaluation flights. During the years and especially lately, F-4EJ Phantoms were shown in other Anniversary and Retirement paint schemes, some of which are available as mask sets. The DN Models’ masks design is based on Hasegawa F-4EJ kits and are usable with other F-4 sets, including the latest and probably the most accurate version of the Phantom – Zoukei-Mura F-4.