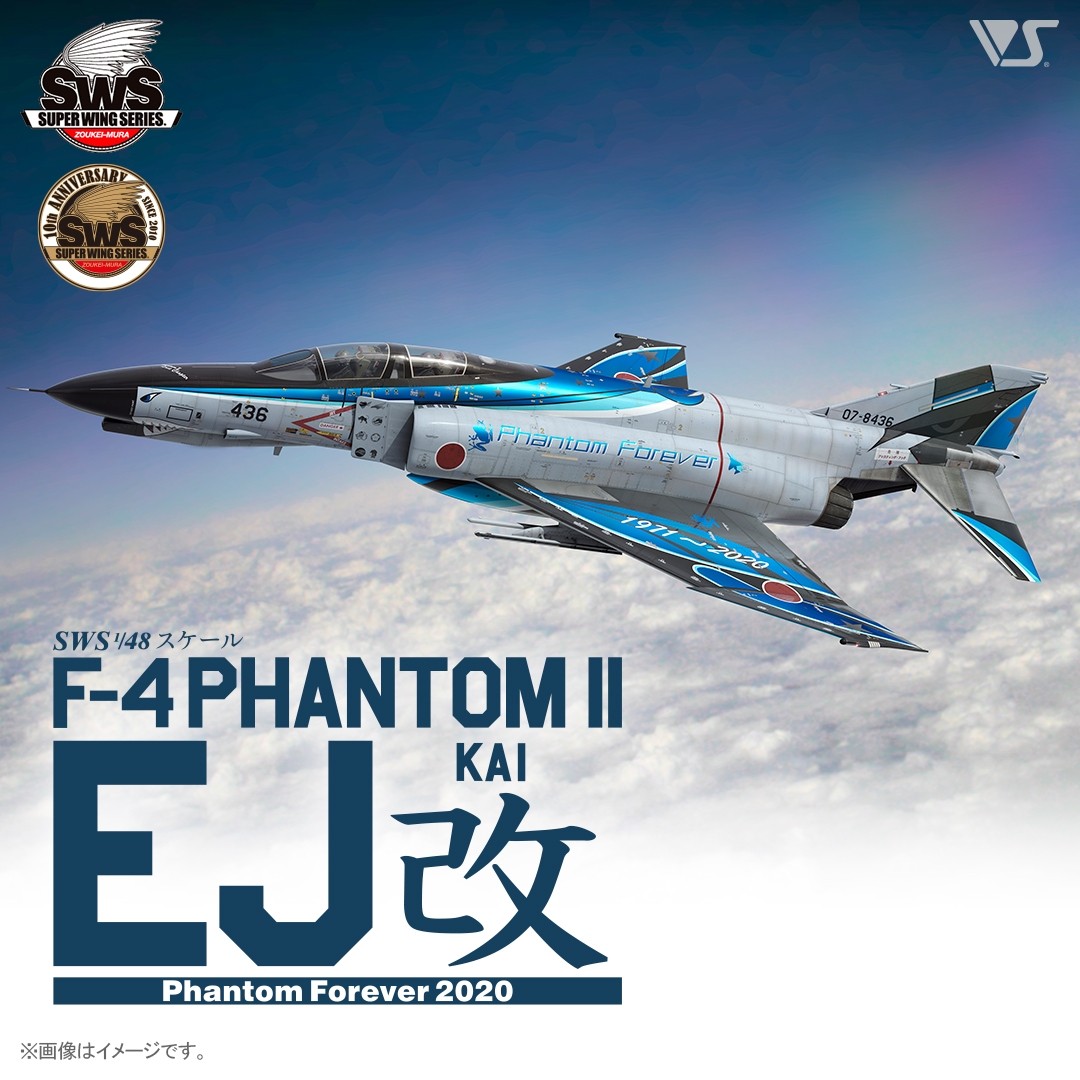 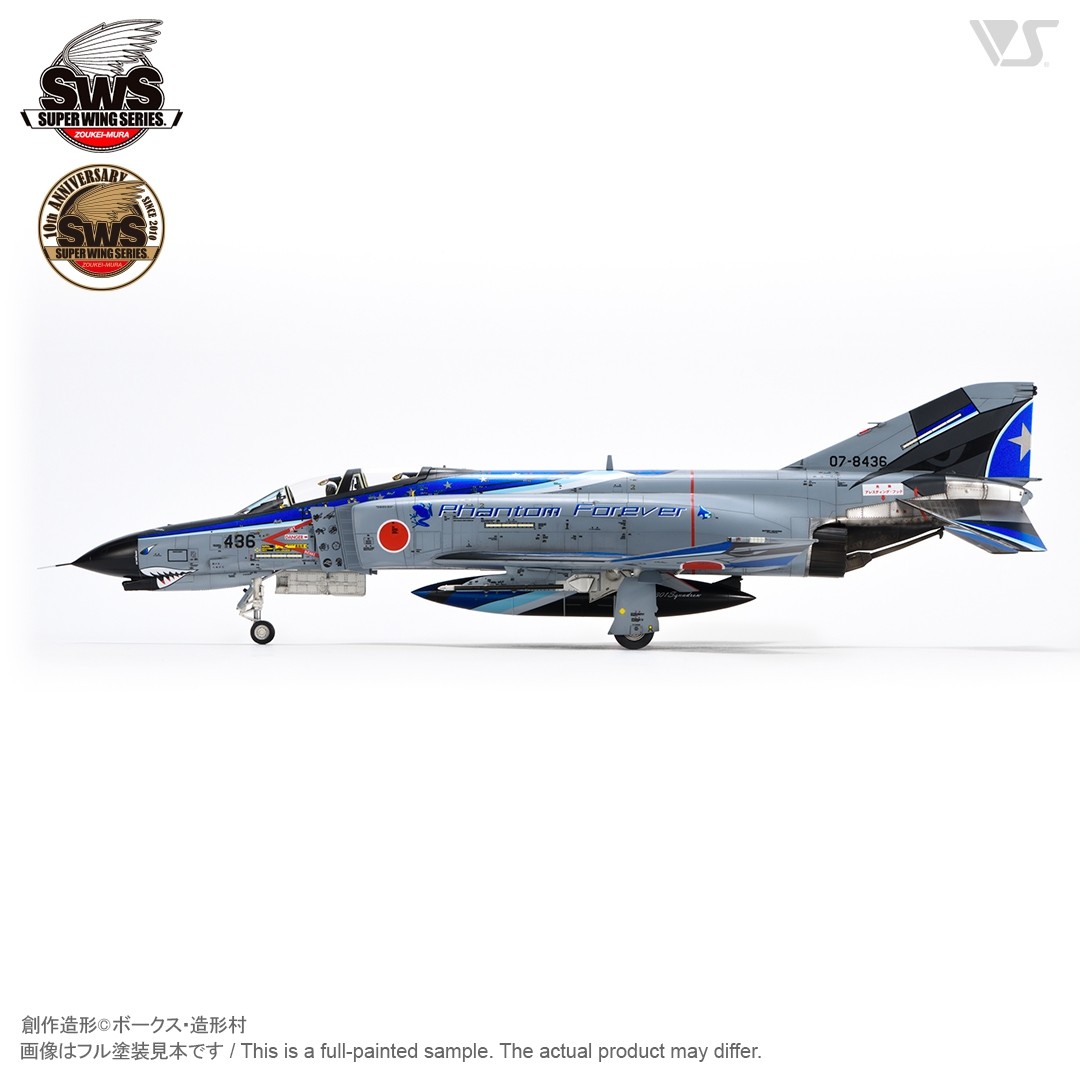 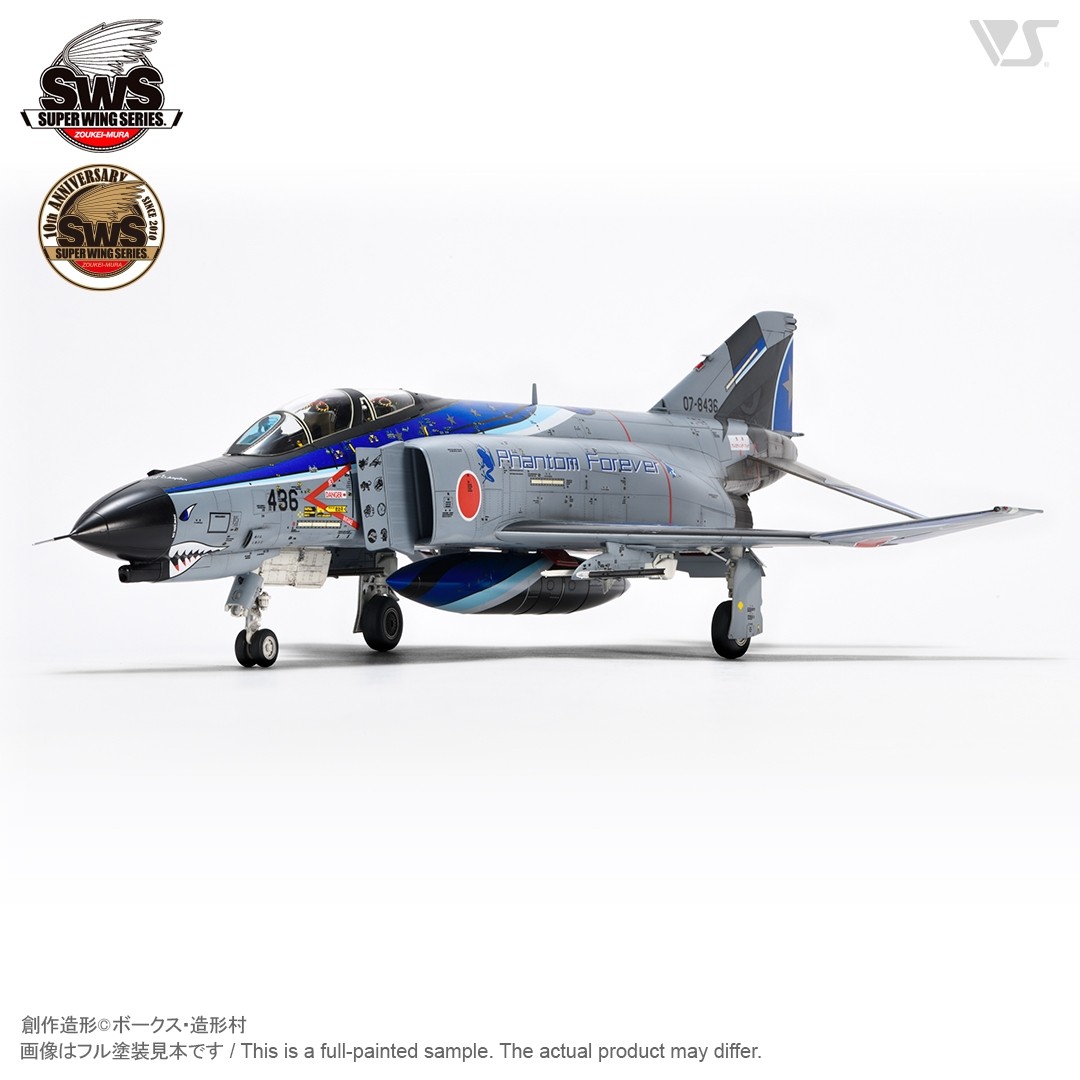 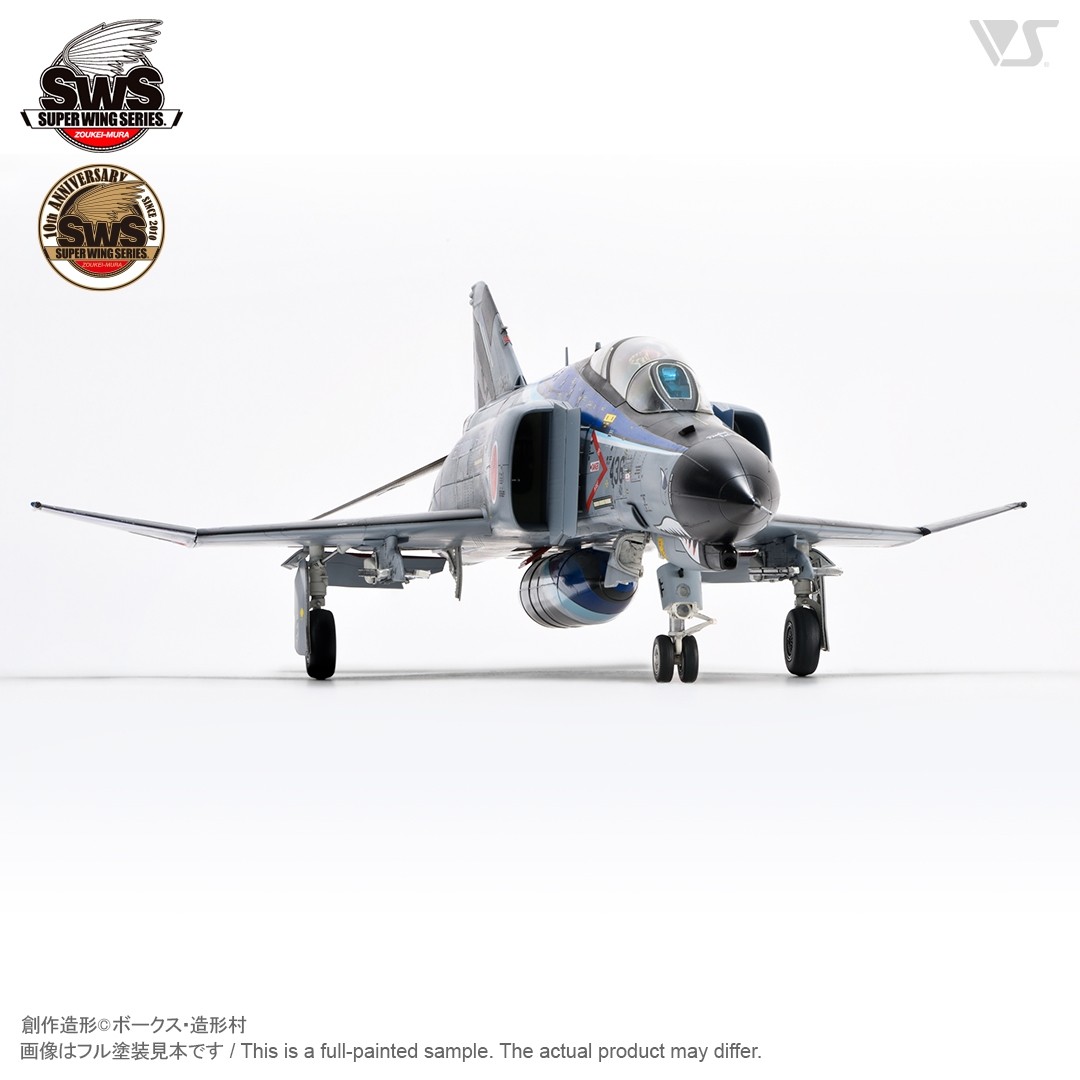 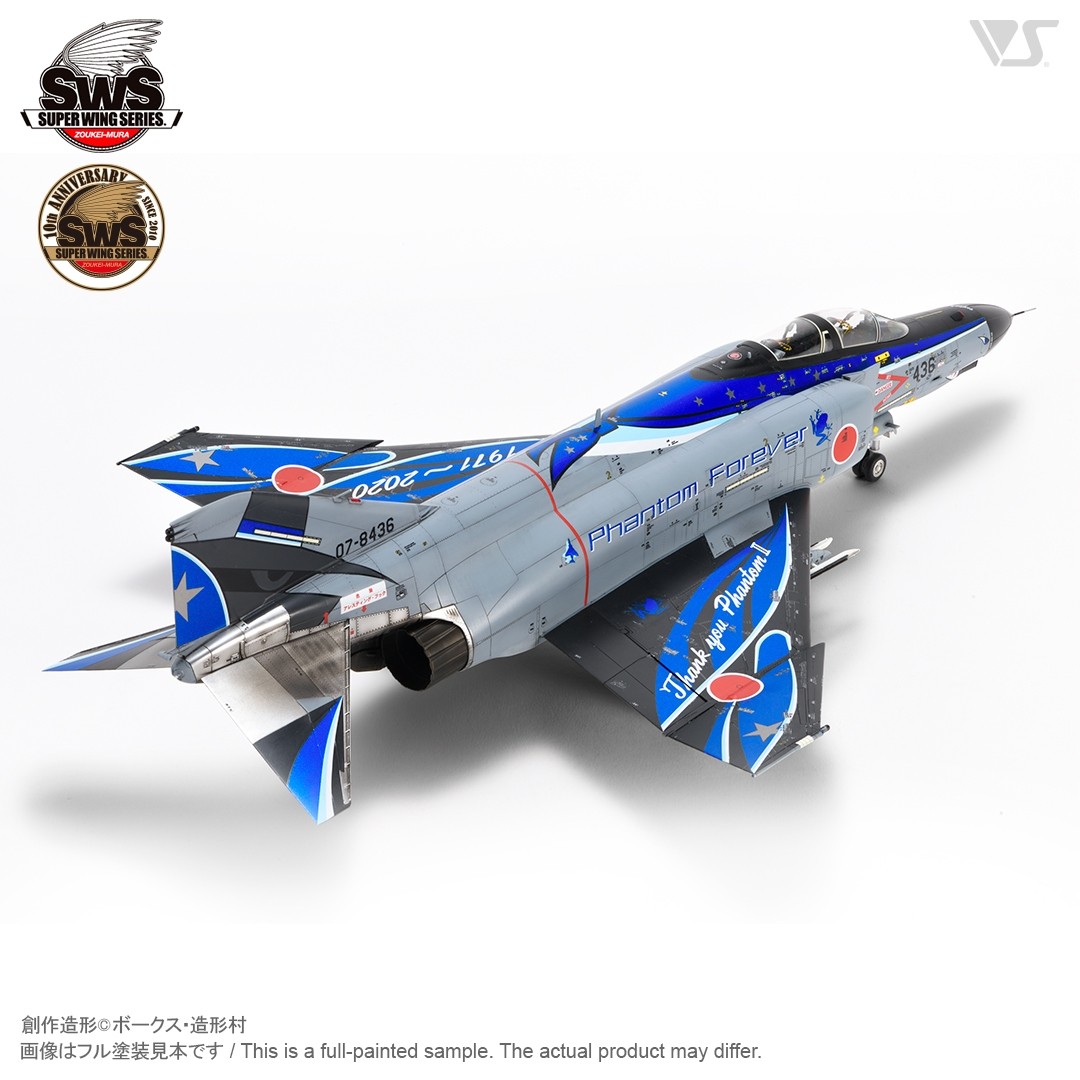 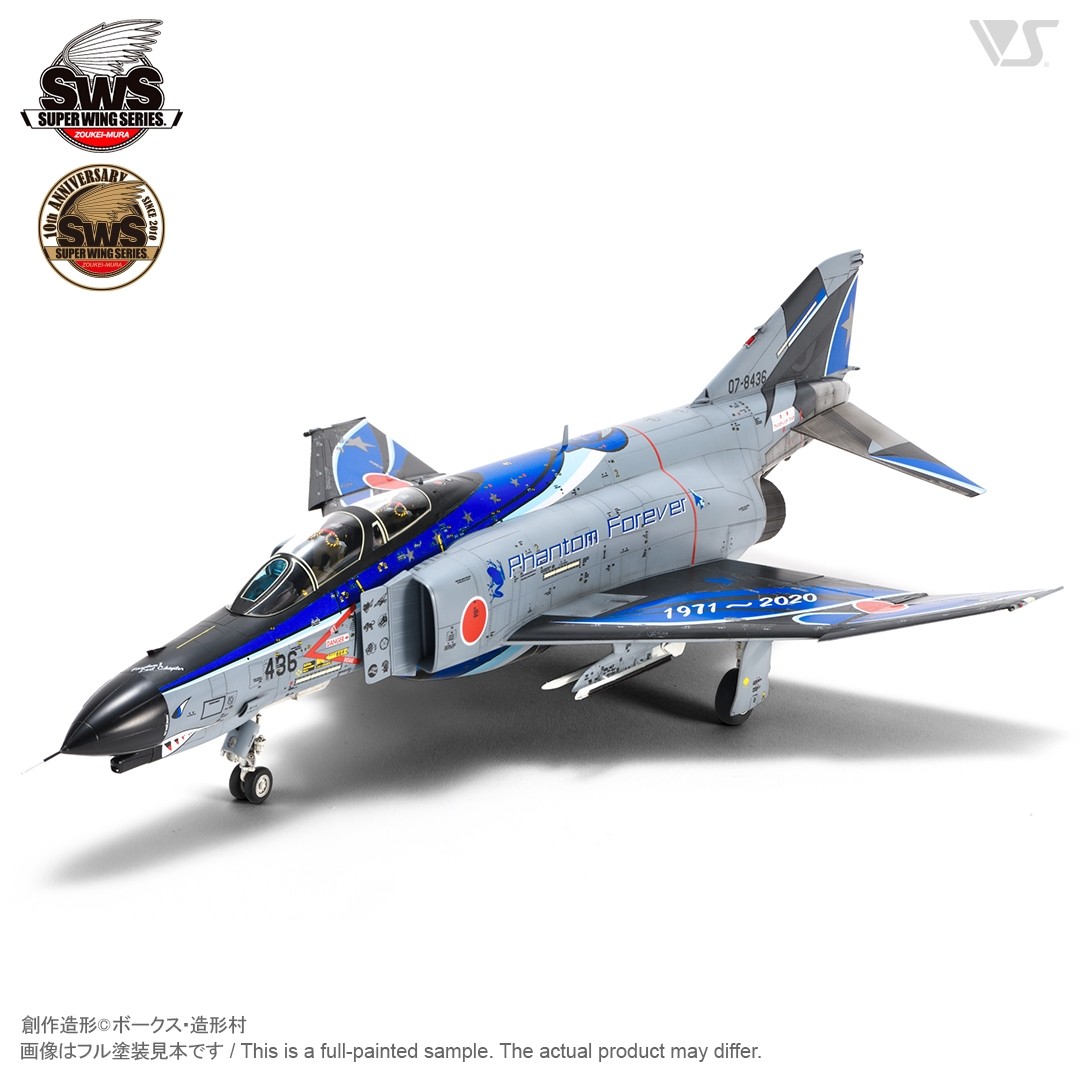 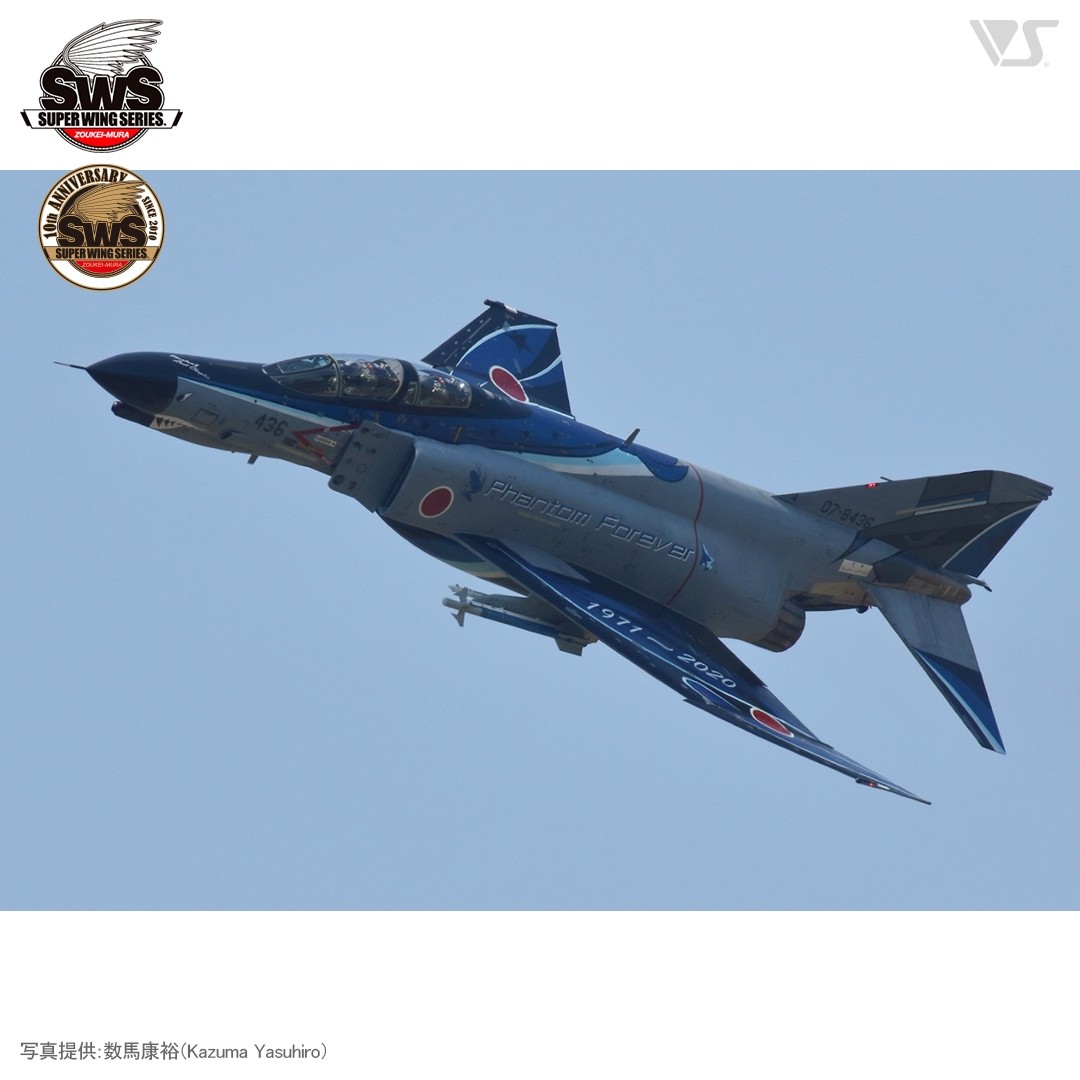 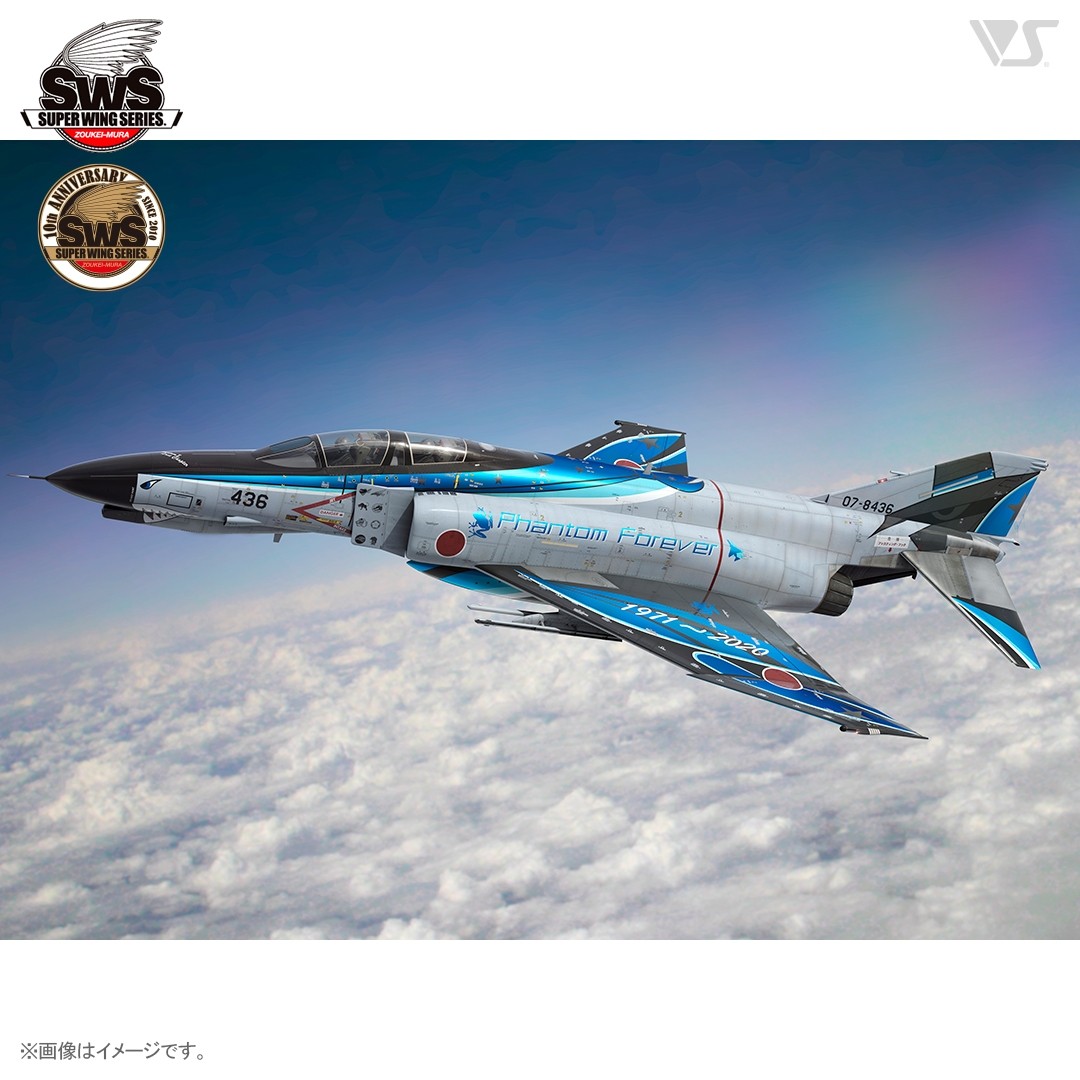 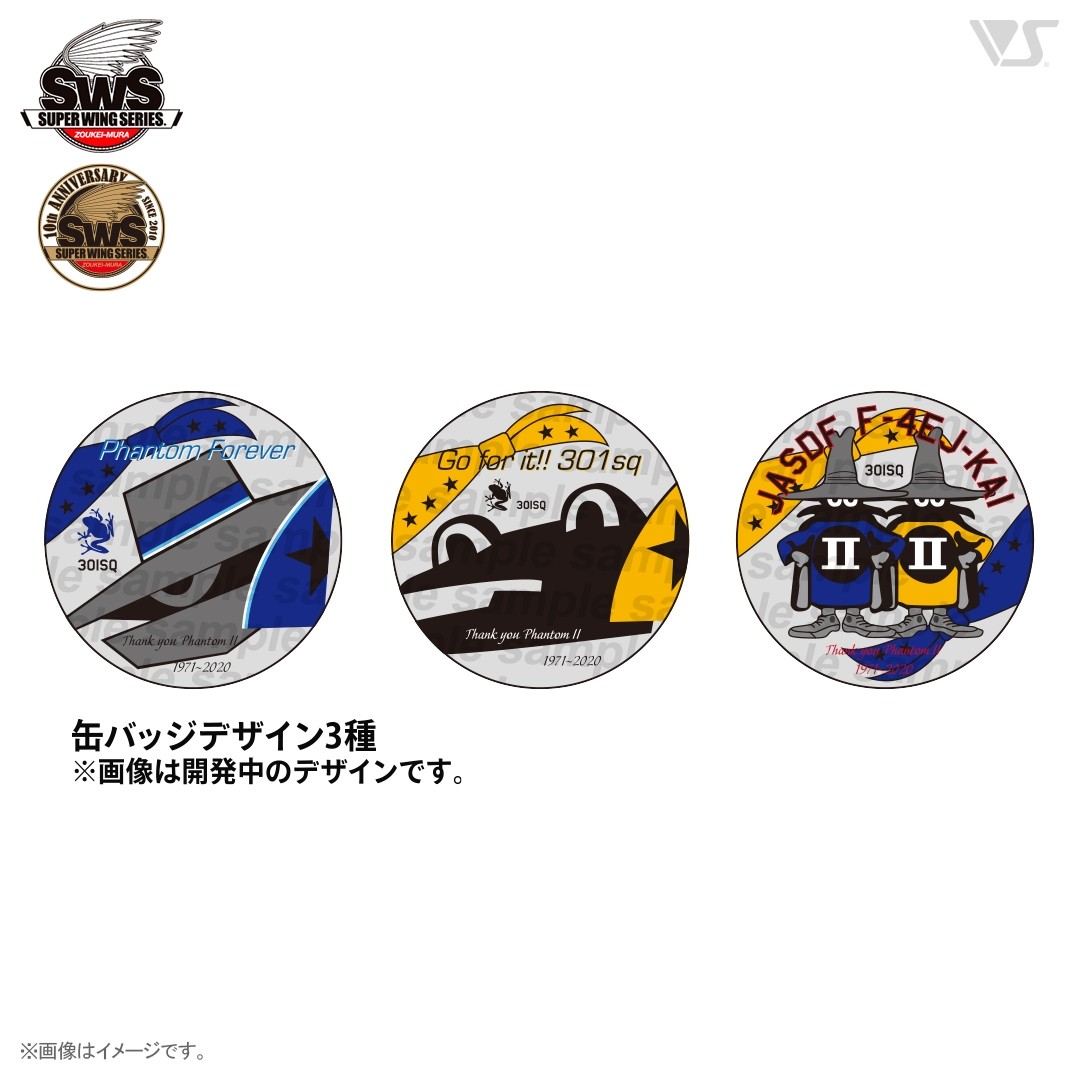 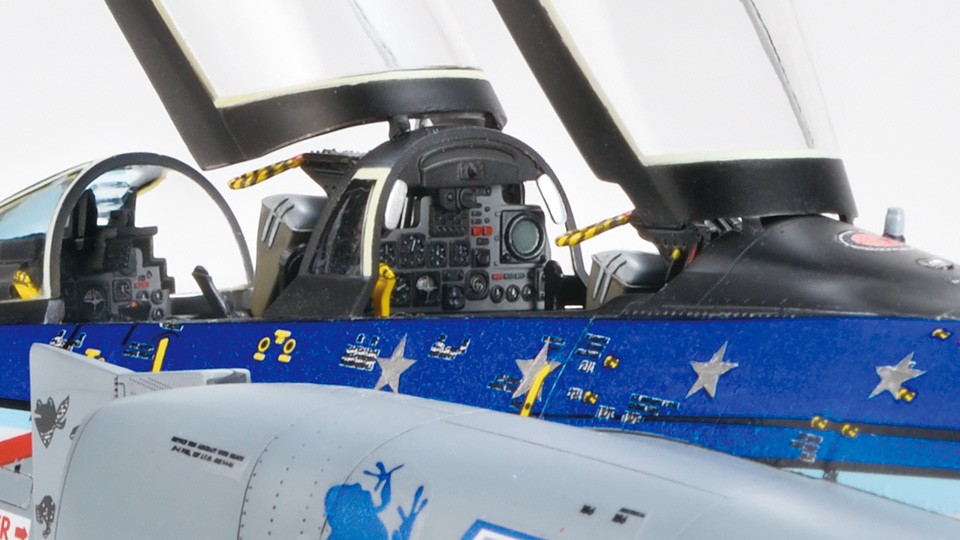 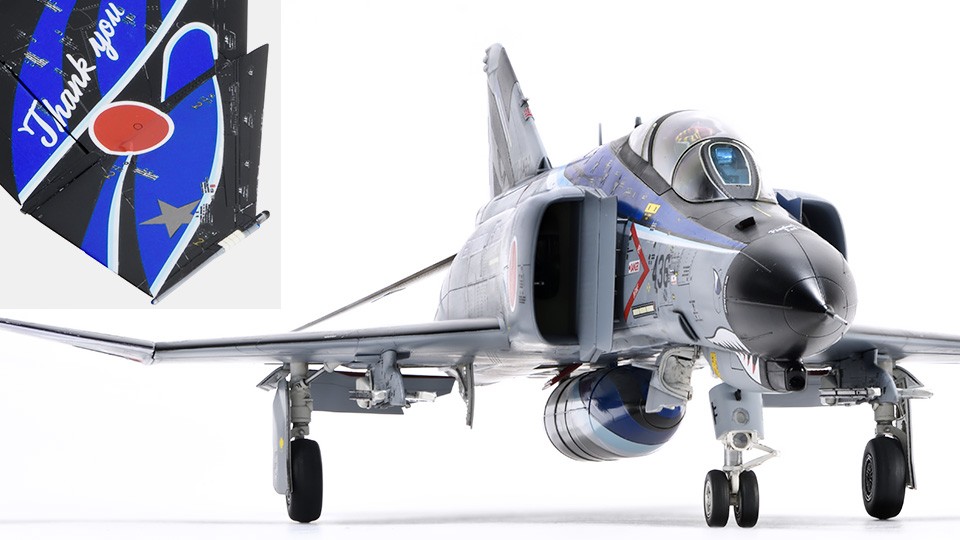 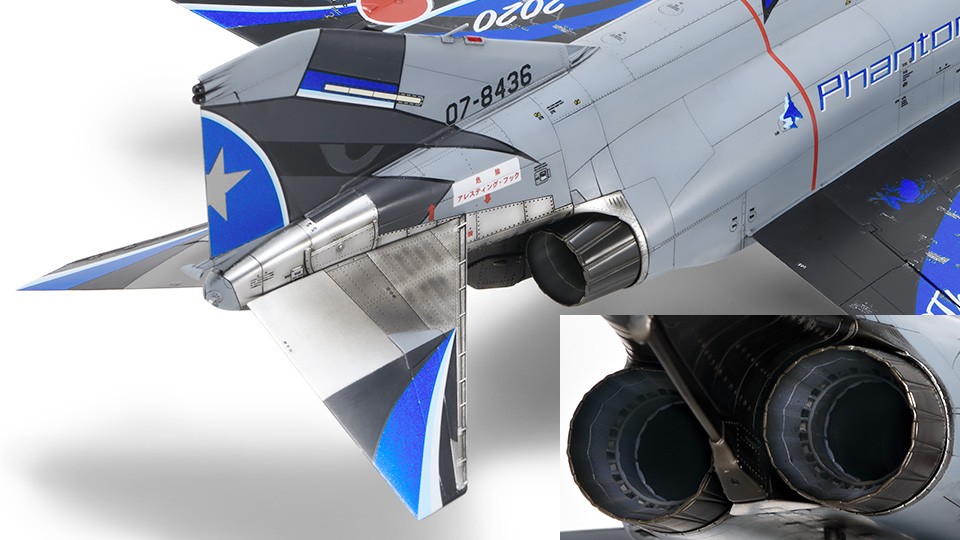 The Three Highlights of the F-4EJ Kai:

The F-4EJ Kai is recreated in its special commemorative JASDF retirement markings, as one of the seven releases in the SWS long-nose F-4 kit lineup (F-4E Early/Late, F-4EJ/EJ Kai, F-4F/F ICE, and F-4G).

Don’t miss the elongated nose for mounting the Vulcan cannon as well as the fairing under the nose for the cannon, distinctive of long-nose F-4 Phantom II aircraft. The F-4EJ Kai utilizes seven additional lightning strips (static dischargers) on the nose radome as well as a long flash suppressor at the tip of the fairing.

In 2020, the 301st Tactical Fighter Squadron of the 7th Air Wing based at Hyakuri Air Base flew F-4EJ Kai aircraft with the special “Phantom Forever 2020” retirement markings. Used in the commemorative final flight, the markings feature the F-4 emblem character “The Spook” on the horizontal stabilizer and squadron’s frog symbol painted in a distinctive metallic blue.

Explanation of each part

As a long-nose Phantom, the F-4EJ Kai’s nose has much to offer. The F-4EJ Kai (“kai” meaning modified) is the modernized version of the F-4EJ, which was adopted for the Japan Air Self-Defense Force from the USAF F-4E. The F-4EJ removed the ground attack and aerial refueling functions from the F-4E, and added a data link to make the aircraft serve as an interceptor. The “Kai” variation was further modified to improve and modernize the F-4EJ, with changes mainly to the avionics including the radar and FCS (fire-control system) modernization. Even just for the nose area alone, the visible outward differences from the F-4EJ included the added lightning strips on the nose radome, the long flash suppressor at the tip of the fairing for the Vulcan cannon, the modified antenna for VHF/UHF transmission on the undercarriage door and more.

Explore the internal structure of the F-4EJ Kai’s evolved avionics. The inside of the cockpit varies significantly between the U.S. Navy variations including the F-4J/S and the U.S. Air Force variations including F-4C/D/E. The most significant difference is that the U.S. Air Force variations had a control stick for the rear seat as well as the front. In that respect, the F-4EJ and F-4EJ Kai are based on the U.S. Air Force layout. The F-4EJ Kai features radar and FCS (fire-control system) modernization, navigation and communication system improvement, missile modernization, and bombing system improvement, with the AN/APG-66J contained in the nose radome. The radar scope and optical sight in the upper center of the instrument panel for the front seat were also drastically changed and the radar scope and radar antenna controller for the rear seat have a different shape and placement from the F-4EJ as well.

Discover the wings of this interceptor, entrusted with the burden of national defense. As an inceptor for the JASDF, the F-4EJ did not have the ground attack and aerial refueling capabilities of the aircraft it was based on, the U.S. Air Force’s F-4E (early production version). However, the wings retained the same hard-wing design, engineered with a priority on acceleration. The Hi-G tank is mounted to the center of the F-4EJ Kai undercarriage. When the aircraft was updated to the F-4EJ Kai, J/APR-6 antennas were added to the tips of both wings and to the fin tip. The TACAN (tactical air navigation system) antenna on the fuselage spine was enlarged for VHF/UHF transmission. A 20 mm M61A1 Vulcan cannon is equipped under the nose as a fixed armament. And don’t miss the fairing’s complex shape with three-dimensional curved surfaces.

No details left out, including the faithfully-replicated engines.

F-4EJ Kai J/APR-6 antennas for the new RWR (radar warning receivers) on the fin tip caused a blind spot for the tail light at the tip of the tail, so an additional tail light was added to the tailcone popup door. The stabilators have slots on the leading edge, and there are additional arrow-shaped reinforcement panels on upper and lower surfaces for both sides for some of the aircraft. The engines are the same as U.S. F-4 aircraft, General Electric’s J79 jet engines. The specific type used, J79-GE(IHI)-17, is almost exactly the same as the J79-GE-17 used to power the USAF F-4E, and can be self-started with MXU-4/A gunpowder cartridge starters. This SWS kit gives the option to assemble with the nozzles opened or closed.