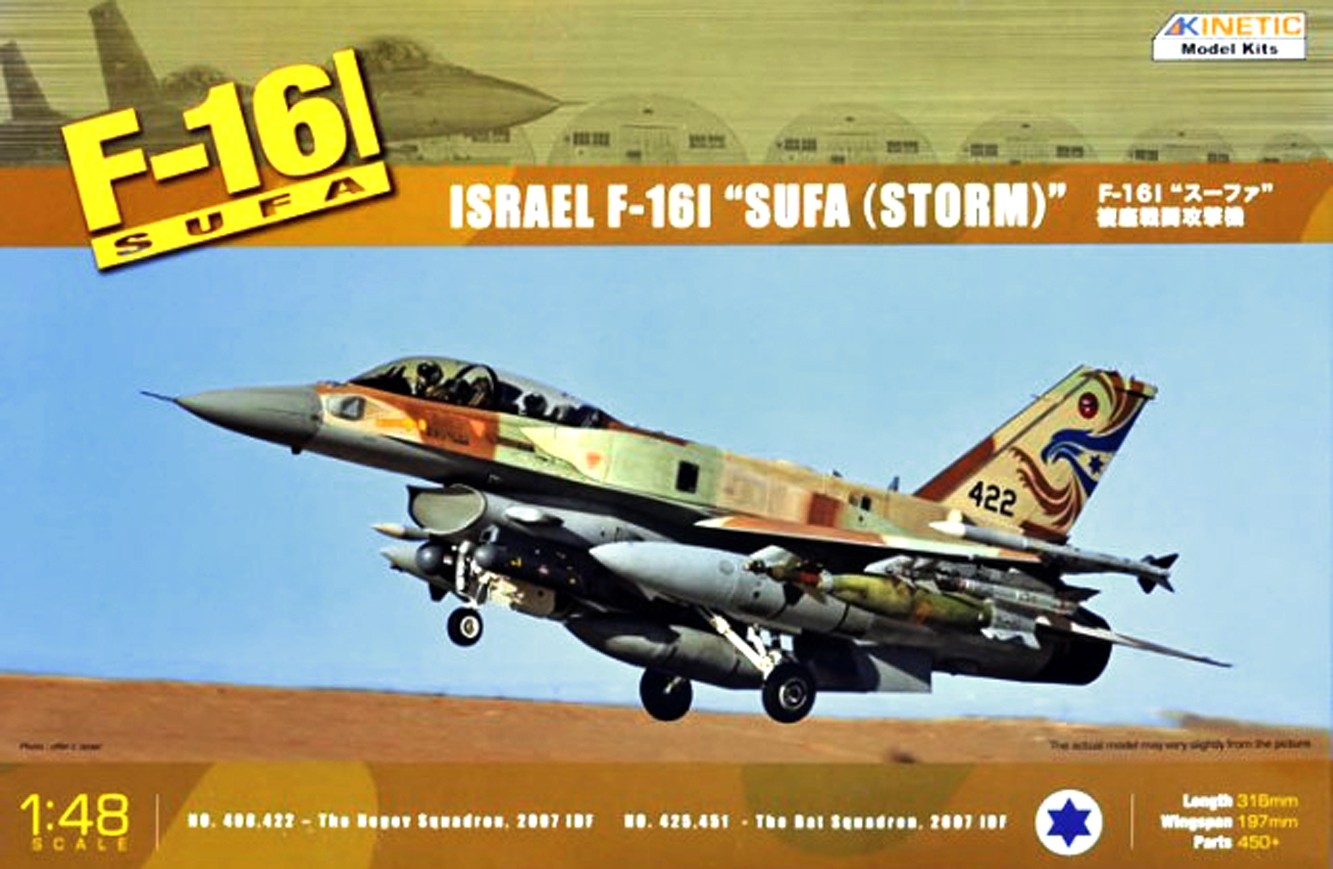 Plastic model kit. Markings:No. 408,422 ?The Negev Squadron, 2007 IDFNo. 425,451 - The Bat Squadron, 2007 IDF* The model contains parts to replicate an accurate F-16I (plastic injection CFT, spine)* Decal design by SkyDecal* Include Photo Etch for exhaust port and metal pilot tubeThe Israeli Air Force's (IAF) F-16I Sufa, a two-seater, is the latest version of the F-16. Israel's Peace Marble V foreign military sales program will supply the Israel Air Force (IAF) with 102 two-seat aircrafts and is the largest Israeli F-16 acquisition yet. The F-16I is specially designed for Israel, and has been named "Soufa," or "Storm" in Hebrew, by the IAF. The F-16I for Israel is based on current Block 50/52 production aircraft. The F-16I has a 52,000 pound take-off weight, considerably more than the earlier F-16s in IAF service, and is armed with the AMRAAM air-to-air missiles.The F-16I has structural, plumbing, and wiring provisions for the Conformal Fuel Tanks (CFT). Attached to the upper surface of the F-16? fuselage, the tank? lower surface conform to the aircraft's shape. This arrangement allows the CFTs to be relatively light weight. With an empty weight of 900 pounds, tank set holds 450 gallons (about 3,000 pounds) of additional JP-5/8 fuel. A CFT set carries 50 percent more fuel than the centerline external fuel tank, with only 12 percent of the drag. The CFT can dramatically increase the operational radius of the aircraft for long range missions. The aircraft can fly a long range strike mission with full weapon's load, and engage in air combat when external (370 Gal) fuel tanks have been dropped. At subsonic speeds the CFT have negligible effect on the aircraft agility. The aircraft fitted with CFT retain nearly the full handling qualities, flight limits, and signature. The CFT set can be fitted or removed in less than two hours. By Kinetic